Some of you may know that I have a bit of a love-meh-hate relationship with skiing, and safe to say this week was full of all three emotions, for me at least, as my skiing went from shambolic to moments of near competence. For the rest of the fam though, who are all now all ski-loved-up, it was an almost perfect week: The sun shone, the snow was gorgeous and their skiing was ace. The only issue? So many people and a LOT of queueing. I think we’ll avoid the New Year week from now on.

I’m attempting to corral my ski musings into some vaguely useful tips as, 10 years into family skiing, we’ve pretty much made all the mistakes it is possible to make! ⁣ 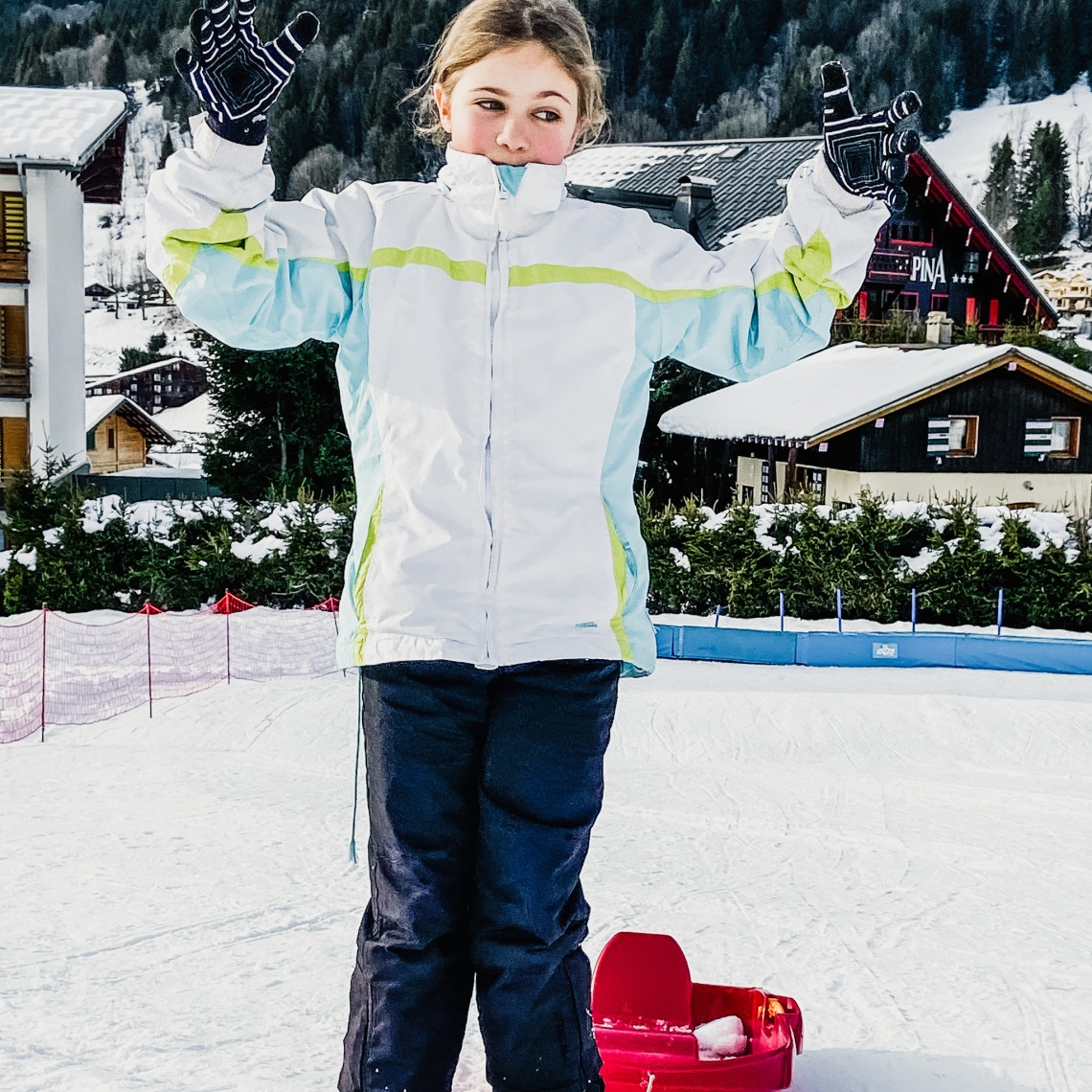 Boringly, we’ve been to the same resort — Les Gets in the Portes de Soleil — for the last ten years. It’s the only place we’ve holidayed more than once, and there are probably plenty of resorts more interesting / cheaper / more authentic, but the fact that we know it so well has been a saving grace as the kids have grown up and developed their skiing ability. It means we all know our way around and which slopes are best for different conditions / times of day etc.

I’m sure other skiers will disagree, but for us sticking with the same resort has been an advantage, and as it’s connected to the large Portes de Soleil ski area, there are opportunities to ski other resorts like Morzine, Avoriaz and Chatel. So, I recommend doing a bit of research before your first trip so that if, like us, you do stick with the same place year after year, it’s one that works for you.

⁣
2. So, tip number 2: You may have to step away from your children
⁣
When we started I was barely better than the kids at the ski thing, but still felt the need to be a competent parent. What this meant was, instead of handing them over to the experts, we tried to learn together. There were three problems with this: ⁣
1. I wasn’t adept enough to actually be of any use. ⁣
2. I shared my angst unnecessarily. ⁣
3. Kids and adults learn entirely differently and need different approaches. ⁣
⁣
If I was doing it all again I’d definitely separate for chunks of the day and send them to a ski school (more on choosing which one later), so I could learn myself without having to be a mum at the same time.

On your marks … this is me about to leave my youngest two for dust last week in Les Gets … in my dreams, at least! In reality, they are WAY faster than me! Look at my position though … if marks were awarded for sticking your bum backwards really really far I’d definitely be the winner ;-)⁣
⁣
3. Tip 3 … How about picking when to go?⁣

⁣
We’ve tried Feb half-term (too busy — some tears shed — it was in the early years), New Year week (still too busy, but no tears this time as we have all grown as skiers and as people), Christmas week (last year — practically perfect, though risky in terms of guaranteed snow) and Easter (several times and again, mostly practically perfect as the weather is usually warm and it’s cheaper / quieter, but, again, you may have iffy snow conditions depending on the year and how high you are). ⁣
⁣
So, if you’re tied to UK school hols, my vote, if you’re going to a popular resort with UK families, would be to either go Christmas week, or Easter. Or, if you don’t mind a shorter break, and shaving off a couple of school days, a long weekend might be a good option as Saturdays are often quieter on the slopes and some resorts offer special Saturday or weekend passes (this is not to be taken lightly – passes are pricey!). ⁣ 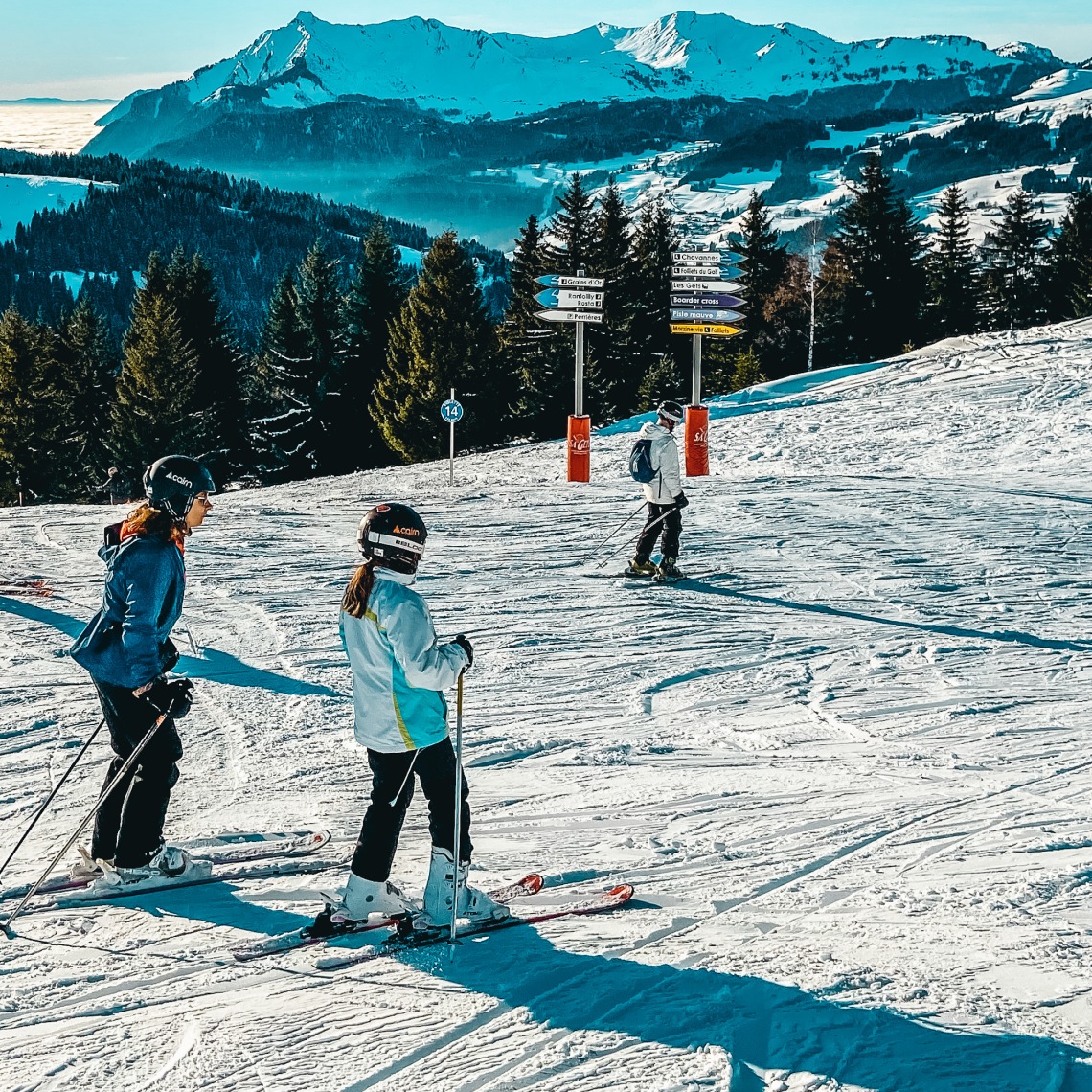 Next up in the famiy ski trip tips … something a little more frivolous and just for newbie skiers: If in doubt, style it out. Just because you are a middle-aged learner sliding down a mountain with poles clenched tight, terror in your eyes and legs locked in a snow-plough as wide as the average-sized family car while your kids whiz merrily past does not mean you can’t make an effort to look cool.

Whether it’s slapping on a bit of lippy, wearing a funky bandana or donning some groovy shades, it’s amazing how switching mentally from just trying to get down a mountain to trying to get down a mountain 𝘴𝘵𝘺𝘭𝘪𝘴𝘩𝘭𝘺 can make you feel a little bit more confident and less aware that what you’re doing feels all kinds of wrong. I’m not in the habit of resorting to accessories, but sometimes needs must.

Here’s to some fabulously stylish face-planting!

I know a handful of families who have got through family ski hols with no ski lessons at all, but the majority do swear by ski school — as many hours as possible — meaning the kids can learn while the parents enjoy their own skiing (or, sometimes, take lessons themselves). It’s a great philosophy, even if the kids do sometimes have to be literally pushed up the mountain to get them to their lesson on time (9.𝟑𝟎 am can feel VERY early on a ski holiday when you have so much kit-faffery to contend with).

If only we had made our life so simple in the early days! Instead, as a family unused to expert input in our holidays, we went for what we thought was a more gentle approach: small /family group lessons, mainly with one of the very lovely British schools, and lots of ‘skiing together’. In fact, for years, this basically just meant at least one of could be found sitting in a cafe with Orla, some Polly Pockets and a plate of spag bol while the other one attempted to skid downhill with the other two without crashing into or losing one of them.

(Big shoutout here to @thesnowinstitute who have been teaching our kids — and me, sometimes— for five years or so now).